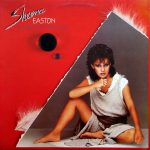 A Private Heaven, released in 1984, was the seventh album release by Scottish singer Sheena Easton. Released by EMI America, the album featured two US Top 10 hit singles: the sassy lead single “Strut” and the controversial “Sugar Walls.” A third single, “Swear”, reached #80. The album itself reached US #15 and sold over one million copies, earning a US RIAA Gold & Platinum certification. In Canada the album went Platinum.

The album marked a conscious effort by Easton to change her image to that of a sexy pop singer after cultivating a “sweet and innocent” image since the launch of her career five years earlier. Easton collaborated with Prince on controversial track “Sugar Walls,” written by Prince under the pseudonym “Alexander Nevermind”. The track and its accompanying video were banned in some regions due to its sexually risque lyrics and was one of several songs cited by Tipper Gore on her Filthy Fifteen list in her efforts to introduce mandatory warning labelling of explicit musical albums.

Easton’s association with Prince would continue for the next few years, though A Private Heaven remains the most successful byproduct of the collaboration. In terms of sales and hit records, it also remains the most popular release of her career in the US. Converse to this, in the UK it was her first album not to chart, while none of the singles released made the Official top 75.