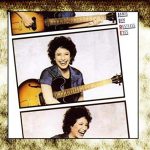 Restless Eyes is the twelveth album by Janis Ian, released in 1981 on Columbia records.

About the album: Although Night Rains had been a huge overseas hit, generating monumental income, Columbia executives were worried that Janis hadn’t broken the album in the United States. Faced with the choice of having a producer assigned to her or finding someone herself, she picked Gary Klein on her friend Charles Koppelman’s recommendation. They set out to create a “pop/folk album”, recording in LA and generally having a good time… but as Janis says, “There is no such thing as a ‘pop album’. There are only great albums, and the rest. We forgot that little detail.” After the failure of this album in the US, and Columbia’s failure to promote it overseas, Janis asked for a release from her recording contract (she still had five albums to go). In retrospect “probably a monumental mistake. I could have stayed there, churning out records and getting paid a quarter of a million each so long as I turned them in, for another decade. Many of my contemporaries did, and their recording careers now are in much better shape than mine. But I felt like my writing was going downhill, and I saw no way to get back on track if I had to continue putting out an album every year and touring so much.” (source:http://www.janisian.com/albums/restless.php)

3 I Believe I\’m Myself Again

5 Get Ready To Roll