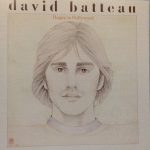 Happy In Hollywood is the debut solo album by David Batteau, released in 1976.

David Batteau (born June 25, 1949) is an American singer-songwriter. Batteau is the son of Blanca Batteau and Dr. Dwight Wayne Batteau, of Harvard University and Tufts University. He is the brother of singer/songwriter Robin Batteau.

He has also focused on solo work, and has released one solo album, Happy in Hollywood (1976) on A&M Records. Batteau had previously worked with his brother Robin as Batteaux, releasing one album on Columbia Records in 1971. This album contains the song “Tell Her She’s Lovely” which was covered by El Chicano in 1973.

In the mid-1980s, Batteau formed the Pop/New Wave band Nomo, which released one album, The Great Unknown, in 1985, scoring a minor hit with “Red Lipstick” before disbanding. He also wrote and performed the song “Walk in Love,” which was later covered by The Manhattan Transfer, reaching Number 12 on the UK Singles Chart.