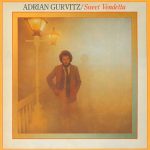 Sweet Vendetta is the debut album by Adrian Gurvitz, released in 1979.

Adrian Gurvitz (born Adrian Curtis Gurvitz, 26 June 1949,in Stoke Newington, North London) is an English singer, songwriter, musician and record producer. His prolific songwriting ability has gained him hits on the Grammy Award-winning soundtrack The Bodyguard Eddie Money’s No. 1 Billboard Mainstream Rock Charts single “The Love in Your Eyes”, and with his own song “Classic”, a No. 8 UK hit single, as well as the Top 10 UK Rock Chart single “Race with the Devil”, with his band The Gun. His early bands The Gun, Three Man Army, and The Baker Gurvitz Army were major influences to the first wave of the British hard rock circuit. Gurvitz also gained notability as a lead guitarist, known for this intricate, hard-driving solos. Gurvitz was placed at No. 9 by Chris Welch of Melody Maker’s “Best Guitarist in the World” list.

In 1979, Gurvitz went solo and recorded two albums with Jet Records. He wrote Sweet Vendetta with US studio musicians Jeff, Joe and Steve Porcaro, and David Paich who later started the band, Toto. He later wrote Il Assassino in 1980. After his deal with Jet Records ended, he signed with EMI/Rak in Europe and Geffen Records in the US. There he released his third album, Classic. Gurvitz reached massive success with the song “Classic”, reaching No. 8 in the UK Singles Chart. “Classic” was one of the most played ballads in England in 1982. The follow-up single was “Your Dream”.

2 The Wonder Of It All

7 I Just Wanna Get Inside Your Head