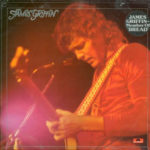 James Arthur Griffin (August 10, 1943 – January 11, 2005) was a singer, guitarist, and songwriter, best known for his work with the 1970s rock band Bread. He won an Academy Award for Best Song in 1970 as co-writer of “For All We Know”.
In 1977, Griffin released a third solo album, James Griffin, also on Polydor, with tracks recorded in 1974 and 1975. He teamed with Terry Sylvester (formerly of The Hollies) on the album Griffin & Sylvester in 1982 and was a member of Black Tie with Randy Meisner and Billy Swan, which released When The Night Falls in 1986, co-produced by T-Bone Burnett. Robb Royer was also credited as a musician on the album. The album was remixed and reissued in the early ’90’s, with Griffin’s voice more prominent on some songs. The Black Tie single “Learning The Game” peaked at #59 on the Billboard country chart in 1991.