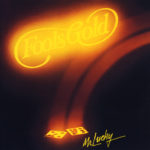 Mr. Lucky is the second album by the band Fools Gold, released in 1977

Fools Gold was a Illinois-based band with soaring harmonies that toured as Dan Fogelberg’s backup band in 1974. Fool’s Gold recorded only two LP’s in their brief career. Pared down to a duo, the main songwriters and singers Tom Kelly and Denny Henson, playing as Fool’s Gold, switched labels and went for the slick L.A. sound that was being offered up in the mid-’70s.