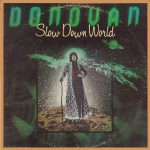 Over his past few album releases, Donovan had hired a succession of popular record producers in hopes of chart success: Mickie Most for Cosmic Wheels, Andrew Loog Oldham for Essence to Essence and Norbert Putnam for 7-Tease. The success of these albums was mild at best, and indicated a shift in Donovan’s popularity away from the superstardom of the 1960s and towards a distinctly smaller fan base. For his next album, Donovan decided to embrace this fan base by taking on the producer duties himself and writing a set of songs that were directly at odds with the popular sounds of the time. While Slow Down World does contain some upbeat numbers, many of the songs feature tired and resigned lyrics.

Two of the songs on Slow Down World were written by Donovan’s longtime friend Derroll Adams. Adams was the influence behind “Epistle to Derroll” from Donovan’s 1968 album A Gift from a Flower to a Garden. Donovan’s hit “There is a Mountain” has similar lyrics to “The Mountain”, one of the Derroll Adams songs covered here.

4 Children Of The World

5 My Love Is True