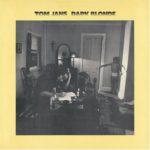 Dark Blonde is the fourth album by Tom Jans. It was released in 1976.