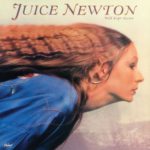 Judy Kay “Juice” Newton (born February 18, 1952) is an American pop and country singer, songwriter and guitarist. To date, Newton has received five Grammy Award nominations in the Pop and Country Best Female Vocalist categories (winning once in 1983), as well as an ACM Award for Top New Female Artist and two Billboard Female Album Artist of the Year awards (won consecutively). She has several Gold and Platinum records to her credit, including Juice, Quiet Lies and her first Greatest Hits album. During the 1980s, Newton charted 14 Top-10 hits across the Billboard Country, AC, and Hot 100 charts, with many of the recordings achieving crossover success and six of the songs hitting the No. 1 position.

Newton’s solo debut album, Well Kept Secret, was released later in 1978 and stands as Newton’s most rock-oriented record, to date. Neither the record nor its sole single (“Hey Baby”) charted, though Capitol Records proceeded to renew Newton’s contract. Capitol’s investment in Newton began to pay off in 1979, when Newton had her first Top-40 Country hit with “Let’s Keep It That Way” (another one-off single). Later that year, the album Take Heart featured five modestly charting singles: “Until Tonight”; “Any Way That You Want Me”; “You Fill My Life”; “Lay Back In The Arms of Someone”; and “Sunshine.” The latter became Newton’s second top-40 single on the country charts in 1980, with “You Fill My Life” reaching No. 41 and “Until Tonight” reaching No. 42. Both of Newton’s initial solo efforts performed with modest success but failed to have lasting impacts on the album charts.

10 If There Could Be