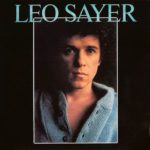 Leo Sayer is the self-titled sixth album by English singer-songwriter Leo Sayer, and released in 1978.

The song “I Can’t Stop Loving You (Though I Try)” later became a hit when Phil Collins recorded it in 2002.

Sayer launched his career in the United Kingdom in the early 1970s, and became a top singles and album act on both sides of the Atlantic in the 1970s. His first seven hit singles in the United Kingdom all reached the Top 10 a feat first registered by his first manager, Adam Faith. His songs have been sung by other notable artists, including Cliff Richard (“Dreaming”).

2 Dancing The Night Away

3 I Can’t Stop Loving You

5 Raining In My Heart

7 Running To My Freedom