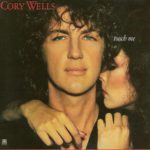 Cory Wells (born Emil Lewandowski on 5 February 1942, Buffalo, New York – October 20, 2015) is an American singer, best known as one of the three lead vocalists in the band Three Dog Night.Cory Wells came from a musical family and began playing in Buffalo-area bands in his teens. His father, who was married to someone else, died when Cory was a small child, leaving his mother to struggle financially until she eventually remarried. She gave Cory her maiden last name so not to implicate his natural father, although Cory did eventually change his last name to Wells (which is a shortened version of his birth father’s last name, Wellsley). His full stage name “Cory Wells” was suggested by “The Enemy’s” manager who had a son named Cory.

Having survived childhood in a rough, racially polarized neighborhood and an even more brutal home environment fueled by an abusive stepfather, this according to then manager Joel Cohen’s band biography, Three Dog Night And Me,Wells joined the United States Air Force directly out of high school. While in the Air Force, he formed a band of interracial musical performers, inspired by his boyhood love of a similar popular band called The Del-Vikings, who had a national hit with the doo-wop song, “Come Go with Me.”

2 When You Touch Me This Way

7 Throw A Little Bit Of Love My Way

10 Lady Put The Light Out