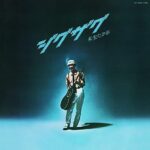 The recording took place in Los Angeles, with participation from David Foster, Jay Graydon, Jim Keltner and others. It is featured on the lyrics card with a photo. Originally, the Flying Kitty Band (members: Kei Ogura, Katsu Hoshi, Hiromi Yasuda) belonging to the same record company had a plan to record in the same place, and the producer’s intention to record the album of the next generation as well. In order to dispel the slump in the first album ” Shallow Dream “, the topic of overseas recording and the expectations of those around him were high, but in the end sales were limited to 12,000.