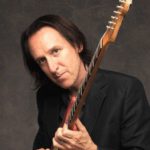 Michael (Mike) Landau (born June 1, 1958) is an American musician, engineer, and record producer. He is a prolific session musician and guitarist who has played on a large number of albums since the early 1980s with artists as varied as Minoru Niihara, Joni Mitchell, Seal, Michael Jackson, James Taylor, Helen Watson, Richard Marx, Steve Perry, Pink Floyd, Roger Daltrey, Glenn Frey, and Miles Davis. Landau, along with fellow session guitarists Dean Parks, Steve Lukather and Dann Huff, played on many of the major label releases recorded in Los Angeles from the 1980s–1990s. He has released music with several record labels including Ulftone Music and Tone Center Records, a member of the California-based Shrapnel Label Group.

In addition to his session work, Mike Landau has also fronted several bands including Raging Honkies and Burning Water. In the early 1980s, he was also in the band Maxus that featured future Los Angeles session musicians Robbie Buchanan, Jay Gruska, and Doane Perry.

1979 Cherie and Marie Currie – Messin’ With The Boys

1979 Robbie Patton – Do You Wanna Tonight

1985 Patti Austin – Gettin’ Away With Murder

1986 Deniece Williams – Hot On The Trail

1988 Barbra Streisand – Till I Loved You

1989 Kenny Rogers – Something Inside So Strong

1989 Michael Landau – Tales From The Bulge

1990 Everything But The Girl – The Language Of Life

1990 Michael McDonald – Take It To Heart

1991 The Triplets – Thicker Than Water

1994 Steve Perry – For the Love of Strange Medicine

2003 Matthias Heimlicher – Running Back To You