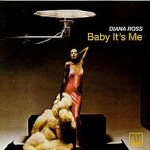 Baby It’s Me is a 1977 album released by American singer Diana Ross on the Motown label that peaked at #18 on the Billboard Top 200 and #7 on the R&B album chart. The album was produced by producer Richard Perry. The LP yielded one Top 40 hit, “Gettin’ Ready for Love”, reaching number 27 on the US Billboard Hot 100. Other charting singles released from the album include “You Got It” and “Your Love is so Good for Me,” the latter receiving a Grammy nomination.

Adult Contemporary drove the success of this album, with both “Gettin’ Ready for Love” (#8) and “You Got It” (#9) being Top 10 hits, while the newly formed Billboard Dance charts ranked “Your Love is so Good For Me” Top 15. Although this album never made the UK charts it was certified Silver for UK sales in excess of 60,000 copies.

Diana Ross would continue to work with Perry including on her pairing with international vocalist, Julio Iglesias on their duet, “All of You” several years later.

5 Your Love Is So Good For Me

6 Top Of The World

9 The Same Love That Made Me Laugh

10 Come In From The Rain